Now that you've got the "We the People" Agenda on your town's warrant, it will help the odds of passing significantly if you can get the word out about it BEFORE and DURING town meeting. 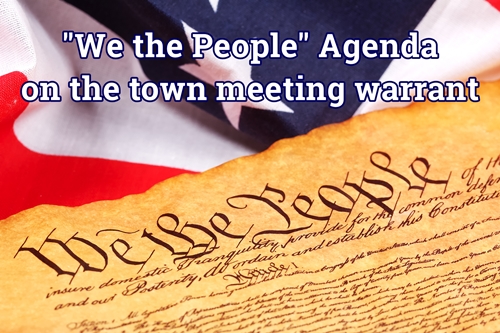 I need your support at Town Meeting on (Date) for a warrant article resolution I helped get on the warrant.    Like many of you, I feel that our politicians and political insiders in Washington no longer works for the voter.   Instead, our Washington representatives do favors for the big corporations, unions and special interests, and don't follow the will of the People.  So we're one of over 30 towns this year which got the We the People Agenda on the warrant.  Almost 70 towns around NH have already passed it, and we think that we'll get that over 100 this year.    I hope you'll support it, and here's the text for it for you to read and think about.   Please feel free to ask me any questions you may have.

New Hampshire Resolution to Get Big Money Out of Politics
By petition of 25 or more eligible voters of the town of ……(Your town)……….. to see if the town will urge:
That the next President and Congress ﬁght big money politics and restore government of, by, and for the people by championing the We the People agenda:
1. Ban Super PACs and overturn Citizens United
2. Expose secret donors and require full transparency
3. Ban bribes from big-money lobbyists and government contractors

That the New Hampshire State Legislature support concrete legislation to enact the We the People agenda.
The record of the vote approving this article shall be transmitted by written notice from the selectmen to the NH congressional delegation and to ……(your town)……….’s state legislators, and to the President of the United States informing them of the instructions from their constituents within 30 days of the vote.

"Good evening.  My name is _____________ , I live at 123 Main Street, here in (YOUR TOWN) and I, like many of you, feel that our politicians and political insiders in Washington no longer works for the voter.   Instead, our Washington representatives do favors for the big corporations, unions and special interests, and don't follow the will of the People.

Warrant article #__________, called the "We the People" Agenda, is a non-binding resolution on over 30 town warrants around New Hampshire this year, joining 69 towns which have already passed similar resolutions.

This article's purpose is to:

o  Send a message to our U.S. Congressional representatives and tell them to get busy and FIX this system of Big Money Politics and get on with the people's business!

o  Demand from our NH State representatives that they create state legislation to fix in NH what Congress won't do nationally.

o  To put in common sense legislation in New Hampshire so that our state government doesn't become corrupted the way Washington is.

Remember all those negative ads we just saw last month?    That unlimited money coming from billionaires and special interests which pay for those ads is made possible by the Supreme Court's Citizens United decision.  In January, our NH State legislature recently refused to create a committee which just would what could be done to overturn Citizens United at the state level.   80% of Republicans and 83% of Democrats support overturning Citizens United -- and our representatives won't even create a committee.

Please join with me in sending this strong message to Concord and to Washington, and return to government by, and for, the people!  Thank you."

Feel free to tailor the message to your town's needs, and try to deliver it without reading it off a card.    It will be more authentic coming from you, anyway!

Thank you again for your efforts, and please let us know how we can help.