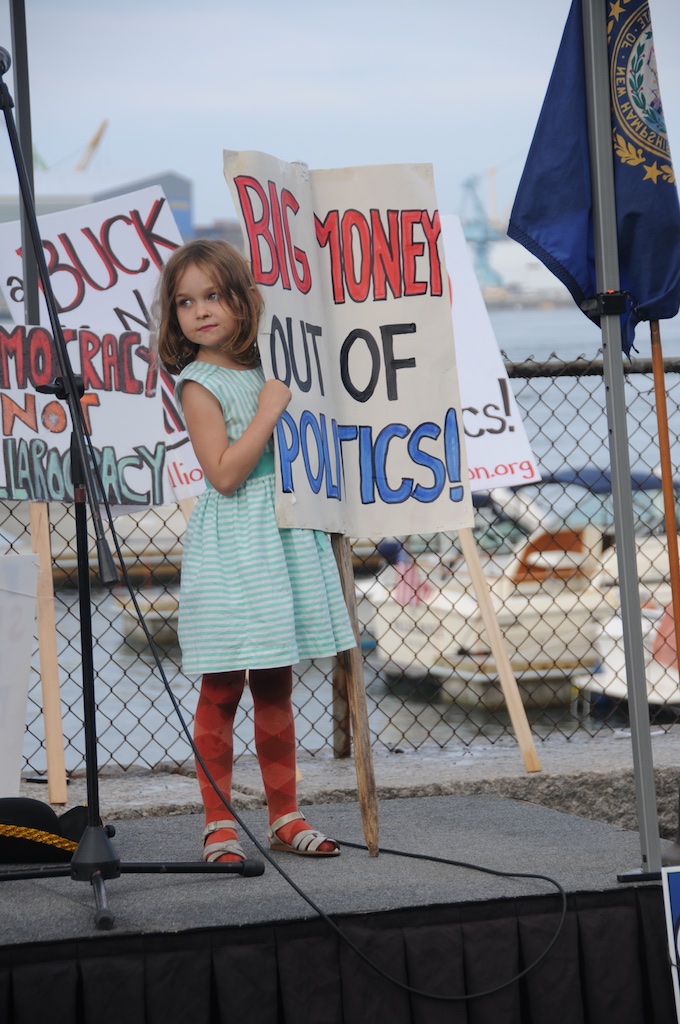 On Saturday, July 4th, we donned our tri-corner caps and took to the streets once again to declare independence from big money politics and demand the presidential candidates support systemic reform. Some 150 rebels signed up in advance to make the 20-mile trek from Rochester or 16-mile coastal walk from Hampton to downtown Portsmouth. After a festive BBQ, we celebrated our first Rally for Independence in Prescott Park with a bipartisan reading of the Declaration of Independence, "heroes of democracy" street theater, remarks by NH Rebellion founder Lawrence Lessig, live music, and plenty of free Ben & Jerry's! Although the weather and family conflicts dampened attendance, over 200 patriots in all braved the rain and gave up their holiday to join our Declaration.

The media took note. In a clear sign that our movement is gaining steam in the mainstream press, dozens of outlets including the statewide WMUR and NHPR, and progressive and conservative radio and newspapers alike from The Boston Globe and Portsmouth Herald to The Union Leader and Washington Times covered the event. Our team and supporters also launched an energetic opinion and social media campaign with a dozen or more pieces printed in the run-up to July 4th and thousands of first-time contacts via social media. Although many news stories were brief, we are actively expanding our relationships with key state and national reporters, especially around our campaign to Ask the Question of every presidential candidate and hold them accountable.

Walks don't plan themselves and I'm very grateful to our lead organizer Ellen and the entire staff, summer fellows, and many volunteers for their diligent work. Thanks also to Betty Tamposi on the Advisory Board and former state senator Burt Cohen for their impassioned reading of the Declaration. And we were backed by gracious in-kind sponsors including Ben & Jerry's, the Dover Friends Meeting, Panera Bread, etc.

Up next: Revive Democracy Weekend on July 17-19, featuring our second annual Granny D Memorial walk from Dublin to Peterborough as well as a film screening and community celebration in Peterborough, house party on Dublin Lake, and Monadnock Summer Lyceum at the Peterborough Unitarian Church.