Colbert + NHR ask the Pope to address Money in Politics

When Pope Francis speaks to a joint session of the U.S. Congress on Thursday, there are many worthy issues he could discuss:  Poverty, income inequality, affordable healthcare or other social ills.  But when comedian and political satirist Stephen Colbert was asked what single message the Pope should bring to Congress, Colbert suggested an issue that interferes with legislation to fix many of those social issues.

"The corrupting influence of money in politics because it reinforces not looking out for the poorest or the least of my brothers," Colbert,  arguably one of America's most famous Catholics, said in the recent interview with a syndicated Canadian Catholic news program, Connect5.    He continued, "I think that's the one they need to hear the most because until you can control the money, you won't control the message of Congress…you won't get action from Congress that looks out for average people," he said.     Colbert famously demonstrated on his previous Comedy Central show, the Colbert Report, how SuperPacs are allowed to cloak their donors and coordinate with campaigns by starting a political action committee himself. 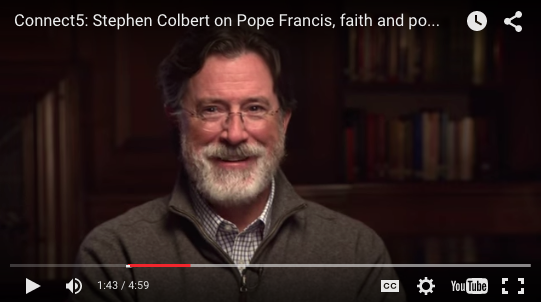 Pope Francis has spoken out about money in politics before, but not to an American audience. Earlier this year in Argentina the Pope warned, "In the financing of electoral campaigns, many interests get into the mix, and then they send you the bill.” He went on to call for publicly financed campaigns and urged that “everything needs to be transparent and clean,” he said.

Such language is prayer answered for the outspoken New Hampshire anti money-in-politics group, NH Rebellion. "The words of His Holiness would be a moral gut punch to the majority of politicians in our system who get elected with millions of special interest SuperPac money, then ignore the best interests of their constituencies," said Dan Weeks, executive director of Open Democracy and the NH Rebellion. "We applaud Stephen Colbert for speaking up about the corrupting influence of money in politics, because it blocks so many issues: Hunger, poverty, environmental issues, infrastructure improvements, healthcare. You don't have to be Catholic to care about that," Weeks said.

NH Rebellion announced Monday that they have created a petition to urge Pope Francis to address the issue. "We'd like to demonstrate to His Holiness that Americans care that their government is free and fair." The petition - at NHRebellion.org/pope/ - will be circulated nationwide, then submitted to the Vatican press office to pass on to the Pope.

Back in New Hampshire, NH Rebellion volunteers continue attending candidate events, asking both Republican and Democratic candidates, "What specific reforms will you advance to end the corrupting influence of money in politics?"   Answers from the candidates are cataloged at Questionr.us, and answers will continue to be added throughout the 2016 election.    Dan Weeks adds that whether or not the Pope speaks on the issue this week won't alter the need for Big Money politics to change.  "Our Presidents, Senators and Congressmen are selling themselves for 30 pieces of silver and betraying the American people.  That's a system which won't end well for our democracy," he said.

If you agree, sign the petition to respectfully ask Pope Francis to put this important issue in front of Congress when he visits this month.