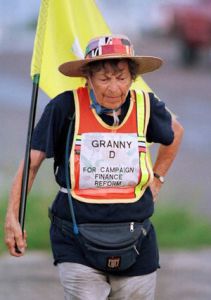 Contact: Brian Beihl, Open Democracy & NH Rebellion,603-620-8300
Event Date:  Aug 3, 2019
Walk organizes in Dublin at 8:30 AM, kicks off at 9 AM, corner of East Harrisville Rd. and Cobb Meadow Rd.
The walk terminates at Peterborough's Depot Square, +/-noon, followed by music, speakers, lunch & ice cream
All is free to public and the press

DUBLIN, NH--- On the 20th anniversary of Doris "Granny D" Haddock's walk across the United States, activists, walkers, politicians, elders, youth and friends of Doris will gather in Dublin and Peterborough this Saturday to celebrate in Granny D style:  They're going to walk six miles, carrying messages against Big Money politics and corruption.

Doris Haddock achieved national fame when, starting at the age of 88, she walked more than 3,200 miles across the United States to draw attention to the need for campaign finance reform. She started walking in California on January 1, 1999 – and 14 months later, she arrived in Washington DC. Media coverage of her walk helped push Congress to pass the McCain-Feingold Bipartisan Campaign Reform Act a year later.   She made hundreds of friends along the way, including legendary singer and activist Pete Seeger, and PBS news host Bill Moyers, with whom she corresponded for years after.   Granny D is now heralded as American's Campaign Finance Reformer, and a hero in the reform movement, yet she is not well known by rank and file voters, whose Democracy Doris Haddock was trying to save.

"Granny D was a model for us all, taking action, big action, well into retirement," said Peter Martel of Bennington, who has worked on campaign reform as a volunteer over the last 6 years.   "She reached across the political spectrum, willing to work with everyone to help us fix a broken system. More than ever, we need many more people like Granny D, willing to spend the time, willing to go the extra mile to both confront problems and offer practical solutions to the major problems facing our state and nation," Martel said.

Saturday's walk starts near Haddock's home on Cobb Meadow Rd., at the corner of East Harrisville Rd., gathering at 8:30 AM and kicking off at 9 AM.   Snacks, water, and support vehicles will be provided.  Shuttles run beginning at 8:30 AM from the parking lot behind the Peterborough Fire Department, and shuttles will be available after the rally for those returning to Dublin.   Walkers are encouraged to bring signs, but can also be provided.    The walk follows Rt. 101 to Union Street, and makes stops at the Green Grocer at 10:30-11 AM and Adams Playground at 11:30, before continuing to downtown Peterborough.  Walkers wishing to walk a shorter distance may enter at these points.

The rally and lunch at Depot Square includes music by Granny D's band, Tatoo, featuring Greenfield residents Leslie Vogel and Fred Simmons, friends of Haddock's telling stories, and a few words from Jeff Clements, president and board member of American Promise, an organization which champions a 28th amendment to the U.S. Constitution to neutralize the Citizens United U.S. Supreme Court Decision.   Lunch, drinks and Ben & Jerry's ice cream are provided at no charge.

More than 3,000 people have walked with Open Democracy and NH Rebellion to date, walking a total of more than 40,000 miles.   So why do people walk in the hot sun, driving rain and cold slush to carry on Granny D's legacy of campaign finance reform?   Pat Waterman of Merrimack, who has walked in other Open Democracy walks, said it's time voters stood up and helped to fix the system.    "It's not enough to just talk about the need for campaign finance reform," she said.  "We should be warriors like Granny D and demonstrate, in a way that puts aside personal comfort, that big money in politics is ruining our highest ideals as a country," Waterman said.

One of Haddock's proposals for reforming the campaign funding system was publicly-financed elections.   As of 2019, 14 states now have a form of publicly-financed elections, which takes power out of the hands of wealthy donors, and returns it to the voters.  New Hampshire is not yet one of those states, though the SB 304 Voter-Owned Elections Act is still active in the legislature this term, and Open Democracy plans to redouble its efforts in the coming year.    The New Hampshire version would distribute four $25 "Voter Dollars" certificates to each registered voters, which the voter gives to candidates in the governor's or executive council races, for which big NH donors, out-of-state donors, PACS, and dark money LLCs have been flooding in recent years.

Tom Westheimer, retired Peterborough businessman and longtime money-in-politics activist, said that history will show that Doris Haddock called it right when she pointed to the quid pro quo of campaign donations in exchange for favors to wealthy donors, corporations and other special interests.   "Twenty years ago, 89-year-old Granny D was like Paul Revere warning us that big money was attacking our democratic institutions,"  Westheimer said.

"It important for us to walk as a movement for campaign finance reform needs movement," said Olivia Zink, executive director of Open Democracy, the organization Doris Haddock founded just before her death in 2010 to carry on her work.   "Getting out into the streets having others see out message and raising the visibility of the issue is critical to growing our movement. Also, being with others who supporters gives me hope that we can change this broken system," Zink said.   "Granny D would be smiling to see so many citizens walking."

Registration for the walk and rally is encouraged, and is available at OpenDemocracyNH.org, or by calling Doreen at 603-608-6211.