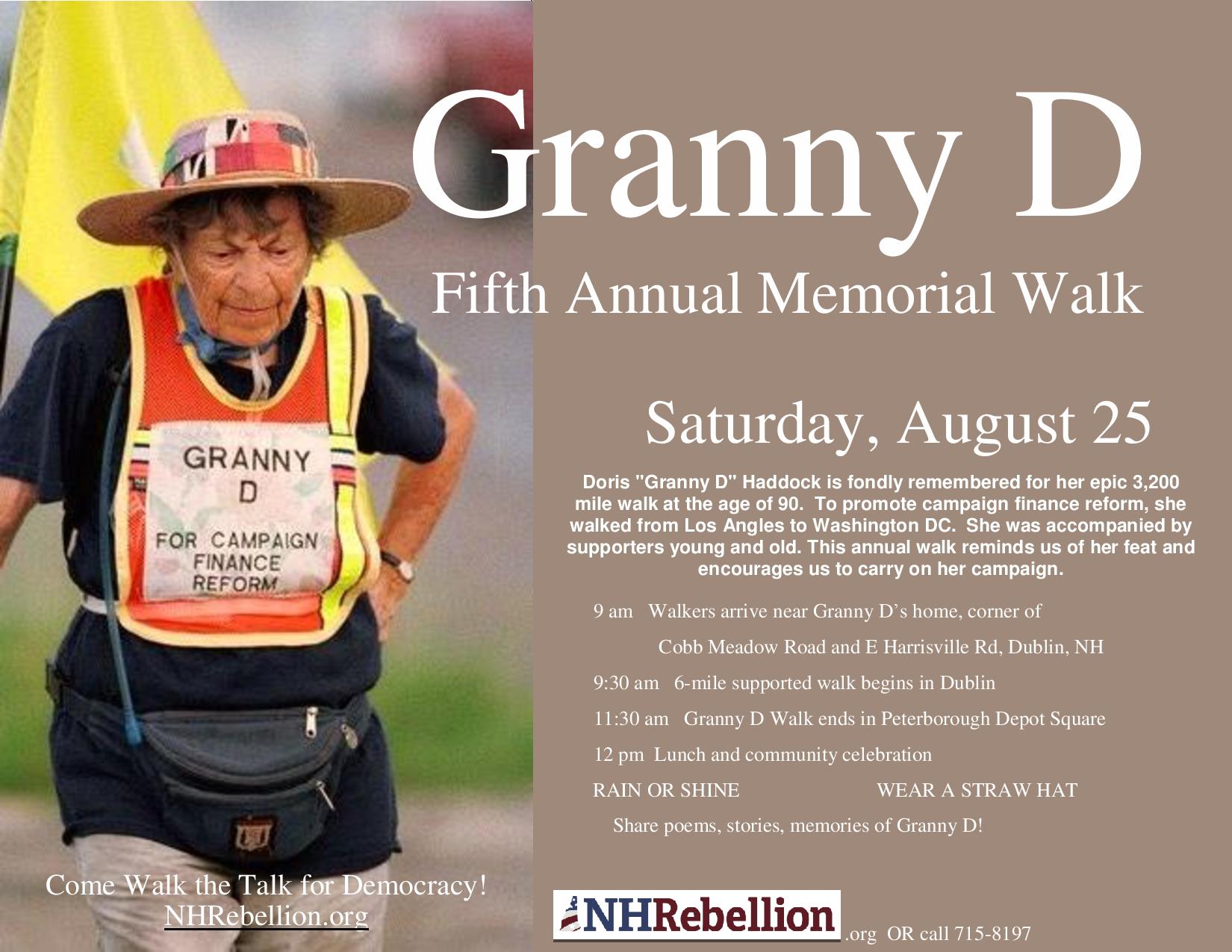 Walkers will gather at 9:00 am near Granny D’s home on Cobb Meadow Road, Dublin, for a six-mile walk ending in Depot Square Park in Peterborough. Food and entertainment will be provided at the end of the march, in Depot Square around noon. The event is free and open to the public.

“Money in politics doesn’t just affect government policies. We’re at the point where it is eroding people’s faith in government,” said Adam Eichen, co-author of Daring Democracy and a Communication Strategist for Equal Citizens.  “When more than half of Americans say that donors’ special influence ‘challenges their faith’ in democracy – and just barely half say they still have any faith in democracy – it’s time to fix the system. I am therefore thrilled to join New Hampshire Rebellion in their efforts to fix our democracy.”

“Eighty percent of New Hampshire voters believe ‘Big Money’ is a problem in New Hampshire elections,” said Open Democracy Executive Director Olivia Zink. “Our NH Rebellion ‘walkers’ are doing something to fix the system – just like ‘Granny D’ walked clear across the country to draw attention to the need for campaign reform.”

Doris “Granny D” achieved national fame when, starting at the age of 88, she walked more than 3,200 miles across the United States to draw attention to the need for campaign finance reform. She started walking in California on January 1, 1999 – and 14 months later, she arrived in Washington DC. Media coverage of her walk helped push Congress to pass the McCain-Feingold Bipartisan Campaign Reform Act a year later. Granny D founded Open Democracy in 2009, and the nonpartisan, nonprofit organization has been holding “NH Rebellion” walks since 2014.

“Things are beginning to change, and they have to change. Article Ten of our state Constitution obliges us to ‘reform’ government whenever it no longer serves the interests of the people – and right now, eight in ten Granite Staters believe special interests have more influence over politics than voters do,” Zink said. “But the good news is: people are more optimistic than they were when we started these walks. Five years ago, 91% of people thought campaign reform ‘would never happen.’ Now, two-thirds say that new laws could be effective, and could help reduce the role of money in politics.”

Open Democracy promotes solutions including a voluntary system of public funding for campaigns. Almost two-thirds of Granite Staters, and half of New Hampshire’s Republicans, say they would support such a system.

Eichen will address the walkers around noon in Depot Square, Peterborough, at the end of the walk. The event is free and open to the public.  Political candidates are expected to attend. For more information, call 603-715-8197 or visit nhrebellion.org.

“We want people to know that they can make a difference, just like Granny D did,” Zink said. “We invite everyone who cares about this issue to join us on August 25th.”

More than 3,000 people have walked with Open Democracy/NH Rebellion to date, walking a total of more than 40,000 miles.