Have a question we haven’t answered? Email us at [email protected]

Why are you focused on the issue of money in politics? 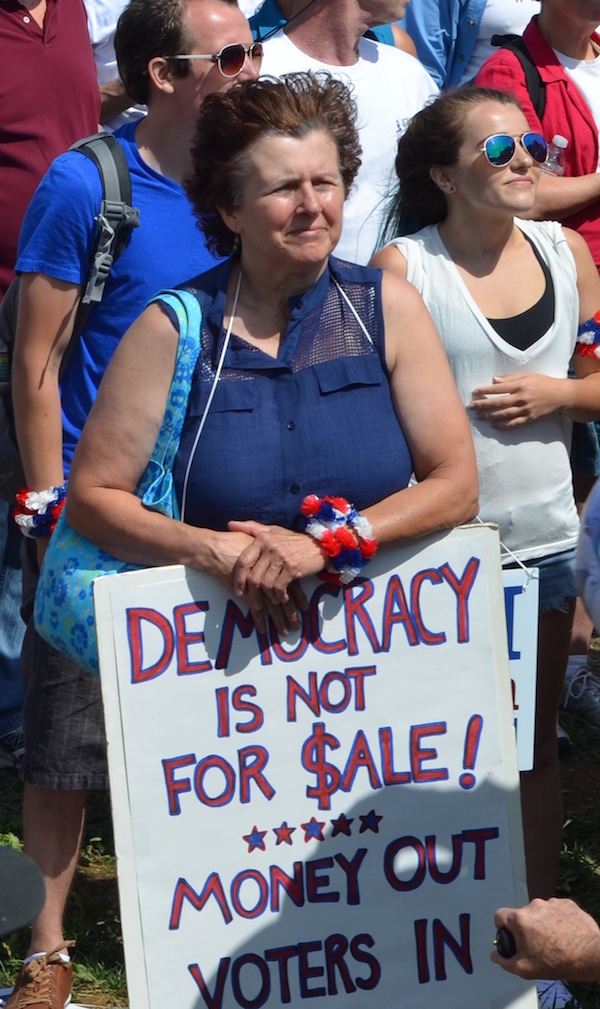 The NH Rebellion was motivated by one unavoidable fact: It remains impossible in America to make sensible progress on any important policy issue issue — environment, healthcare, education, or the long-term deficit — until we address the system of corruption that has infected our government. Money comes in from various special interests ranging from unions, corporations, individuals and various other sources which leads to the dysfunction that blocks sensible progress on any of the major issues we face. The way we fund elections in America forces public officials to focus on the task of raising money, and hence upon the needs of the tiny fraction of people that funds campaigns, instead of the job that they were elected to do.

What do you mean by “system of corruption?”

To most, the word “corruption” suggests criminal acts — bribery or quid pro quo influence peddling. We are talking about a different, legal kind of corruption: a corruption of the republic the Constitution’s framers designed.

For a candidate to simply get onto a ballot, let alone get elected, requires ever larger sums of money as the Supreme Court systematically eliminates restrictions on contributions. The result is that members of Congress spend 30–70% of their time raising money from a small number of influential, deep-pocketed donors. In addition to leaving them less time to actually serve their constituents, this creates a system of influence peddling. This system promotes the interests of their funders rather than those of their voters, giving funders undue power over public policy.

The framers of our Constitution designed a republic with a Congress that would be, as Madison put it, “dependent on the people alone.” Even though it doesn’t involve criminal acts, Congress’s mission to serve the people has been corrupted. Congress serves the funders instead.

How should we fix the system of corruption?

There are many different ideas being promoted by reformers on both the Right and the Left, all of which deserve consideration. However, our goal is not to demand a specific set of legislative solutions. Instead, we’re asking that politicians tell us what they will do to fix the problem.

By making systemic corruption THE issue of the 2016 presidential primaries, we give voters from across the country the opportunity to vote for a candidate who really gets this issue and who intends to fix it.

Why is this called a “rebellion?”

The New Hampshire Constitution’s Article 10 expressly protects citizens’ “right of revolution.” Although we do not intend to start a revolution, our system of elections has become so corrupt that we must rebel against the status quo. Article 10 reads: "Government being instituted for the common benefit, protection, and security, of the whole community, and not for the private interest or emolument of any one man, family, or class of men; therefore, whenever the ends of government are perverted, and public liberty manifestly endangered, and all other means of redress are ineffectual, the people may, and of right ought to reform the old, or establish a new government. The doctrine of nonresistance against arbitrary power, and oppression, is absurd, slavish, and destructive of the good and happiness of mankind."

In the 2012 presidential election, polls showed that political corruption driven by money in politics was the #2 most important issue to Americans after the economy, and yet it was not discussed in any debate. The NH Rebellion alongside the public will make sure that this root problem is addressed and given the attention that is needed during the 2016 New Hampshire Presidential Primary.

How are you funded?

We are a non-profit organization funded by donations from our supporters and grants from philanthropic organizations. As a 501(c)(3) non-profit, (unlike PACs and Super PACs), we do not spend any money to support or oppose election campaigns/candidates. We are focused on educating citizens about the importance of the issue of corruption.

Why are you walking?

We were inspired by Doris Haddock (aka, “Granny D”) who in 1999 at the age of 88, walked from Los Angeles to Washington, D.C. with a sign on her chest that read, “CAMPAIGN FINANCE REFORM.” Like Granny D’s walk, our walks will help draw national attention to this issue and force politicians to address it.

How will walking make a difference?

First, with hundreds of Granite Staters walking for reform, the walks prove that Americans care about the issue of corruption.

Second, the walks give people hope that we can do something to solve this problem. The walks give everyone a way to participate in a tangible, visible way.

Third, the walks help us recruit New Hampshirites to join us in 2016 in asking every presidential primary candidate, "What specific reforms will you advance to end the corrupting influence of money in politics?"

Every presidential primary candidate comes through New Hampshire, and will be asked this question. The mainstream media will be forced to cover the issue and make it the most important issue of the primaries. Voters will then have the information necessary to choose a candidate who will champion reform.

How well is the plan working so far?

Extremely well! When we first walked in January 2014, we thought just a handful of people would join us. Instead, 207 people walked, including 19 who traveled with us for all 185 miles. We received international media coverage, including extensive coverage by major media outlets in New Hampshire, reaching an estimated audience of 3.2 million people. We’ve been overwhelmed by the support we’ve received here and across the country.

In July of 2014 we held a walk along the New Hampshire seacoast. This walk brought together just over 500 walkers. This gathering represented the largest non-partisan event in New Hampshire in a number of years. To see the news coverage of this and other events please visit our news and media page.

What is The Question?

The New Hampshire Rebellion effort wants to ask every presidential primary candidate who visits New Hampshire (that is to say, all of them) a question that will force them to make a statement on the issue of systemic corruption in the political process:

"What specific reforms will you advance to end the corrupting influence of money in politics?"

How do I ask a candidate The Question?

As candidates begin to visit New Hampshire for the 2016 presidential primaries, our volunteers will attend the events, ask the question, and capture video of the response.

What happens after you ask a candidate The Question?

We want to ask The Question while cameras are rolling and make the footage available online. We want to publicize this issue and make it the primary issue of the 2016 presidential election, as well as get the information about each candidate’s responses to every voting citizen so they can make a more informed choice.

How can I get involved?

There are many ways you can support the NH Rebellion, whether you’re in New Hampshire or somewhere else in the world. You can read all about on our Get Involved page.

Do you have any videos I can watch and share with my friends?

And if you’d like to better understand the need to fix the way political campaigns are funded, watch Lessig’s TED Talks.