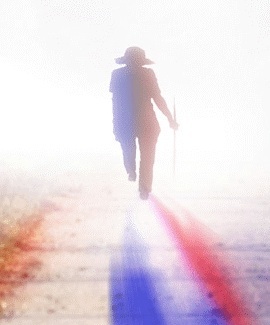 Haddock achieved national fame when, between the ages of 88 and 90, starting on January 1, 1999, and culminating on February 29, 2000, she walked over 3,200 miles (5,100 km) across the continental United States to advocate for campaign finance reform.

Haddock's walk across the country followed a southern route and took more than a year to complete, starting on January 1, 1999, in southern California and ending in Washington, D.C., on February 29, 2000.

In 1960, Granny D began her political activism when she and her husband successfully campaigned against planned hydrogen bomb nuclear testing in Alaska, saving an Inuit fishing village at Point Hope. Granny D and her husband retired to Dublin, New Hampshire, in 1972 and there Granny D served on the Planning Board and was active in the community.

After the first efforts of Senators John McCain and Russ Feingold to regulate campaign finances through eliminating soft money failed in 1995, Granny D became increasingly interested in campaign finance reform and spearheaded a petition movement. On January 1, 1999, at the age of 88, Granny D left the Rose Bowl Tournament of Roses Parade in Pasadena, California, in an attempt to walk across the United States to raise awareness of and attract support for campaign finance reform.

When Granny D arrived in Washington, D.C., she was 90 years old (having begun the journey at

88 and having two birthdays en route), had traveled more than 3200 miles, and was greeted in the capital by a crowd of 2200 people. Several dozen members of Congress walked the final miles with her during the final day's walk from Arlington National Cemetery to the Capitol on the National Mall.

In 2003 and 2004 Doris led a voter registration drive which registered 23,000 people all while traveling in her small RV she named "Rosie".

Granny D wrote three books, all co-authored with Dennis Burke. She ran for the Senate in 2004 as a Democratic challenger to incumbent Republican Judd Gregg for the U.S. Senate, after the previous Democratic nominee was implicated on a campaign finance scandal. The 2007 HBO Documentary, "Run Granny Run," directed by Marlo Poras, about Granny D's 2004 Senate campaign.

She continued to be active in politics to the end of her life, and celebrated her 98th, 99th and 100th birthday by lobbying for campaign finance reform at the New Hampshire State House.