A Message from Marianne Williamson

During the past few decades, huge portions of the financial resources in the United States have been siphoned off into the hands of a very few. This imbalance amounts to a direct threat to our democracy, for in the words of the late Supreme Court Justice Louis Brandeis, "You can have large amounts of money concentrated in the hands of a very few, or you can have democracy. You cannot have both." 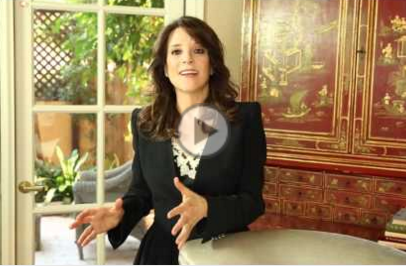 This economic injustice did not come about by accident. Rather, it was created year after year, one piece of legislation after another, turning our government, for all practical purposes, into little more than a handmaiden to huge moneyed forces. Time and time again, the short-term economic interests of entities such as defense contractors, fossil fuel companies, pharmaceutical companies, insurance companies, and big banks are placed before the health and well-being of the American people. In many ways, Wall Street has become more powerful than our government.

Due to nefarious Supreme Court decisions such as Citizens United, this corruption is now legal! Money is able to exert a huge and unfair influence over the functioning of our politics, turning the U.S. government into a system of legalized bribery. Our government has increasingly abdicated its role as protector of the "common good" in favor of multi-million dollar campaign contributions from PACs and Super PACS, and none of this will stop unless we, the people, stop it. Our government now functions, for all practical purposes, not as a democracy but as a plutocracy. And it is up to the people of the United States to fix this.

Every generation of Americans is a steward of our democracy, each facing its own struggles to redirect the course of our nation when necessary. From the abolition of slavery to Women's Suffrage, from the Civil Rights movement to marriage equality, we are heirs to a great tradition of Americans who did whatever they needed to put America on the track of liberty and justice – when in fact we were not.

For three days in early February, our movement is going to take center stage in the New Hampshire primary campaign. Just days before the first primary votes will be cast – and during the Republican presidential candidates’ debate in New Hampshire – hundreds of activists are gathering in Manchester for NH Rebellion's We the People Convention. I am excited to join with artists and academics, faith leaders and performers, and scores of people from across the political spectrum who are working so hard to change our country’s path. Even the presidential candidates will attend.

Click here to find out more about the We the People Convention and RSVP if you can attend.

Please do not underestimate the power that you, as an individual, hold to put America back on the track to full democracy, liberty and justice for all. It won't happen unless we make it happen.

I hope I'll see you there!

PS. Help us mark the 6th anniversary of Citizens United tomorrow in NH by summoning the Force to #FightBigMoney at a State House press conference followed by "Jedi" visits to the presidential candidates and a FREE SCREENING of Star Wars: The Force Awakens with special guests!