Over the course of the summer, we've had the privilege of working with a team of six smart, dedicated, talented young people through our Democracy Fellowship program, in partnership with the Foundation for Civic Leadership and Democracy Matters.  You may have seen them at walks, fairs, or other events, but here's your chance to get to know them!  Meet Emma: 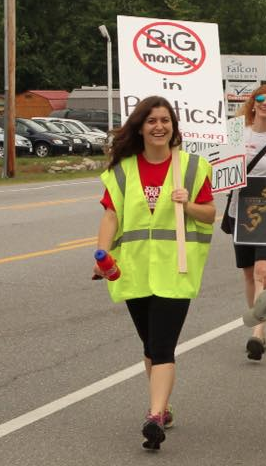 My name is Emma, but I’m better known to some by my twitter handle, @demmaocracy. I know it’s not rocket science, but I thought it was pretty clever.

Studying political science at Union College in Schenectady, New York, I am often disappointed in what they leave out of the curriculum - namely, the influence that big money plays in our political process. At school we take classes on foreign policy, political theory, and domestic conflicts. But they seldom mention the reason why problems aren’t addressed, which is the fact that we, the American people, no longer have a say in our government. People in Congress are bought and paid for by lobbyists, big money donors and special interests.

I became frustrated that that truth was not being represented in my political science department and that no one on campus was talking about it. So I decided that it was up to me to learn about the issue. I spent my spring trimester in Washington D.C. interning at Public Citizen, where I was able to delve into issues relating to the revolving door and the impact that lobbying dollars have on Congressional decisions. It was there that I saw this issue come to life. Walking around the halls of Capitol Hill it is easy to see the impact that lobbyists have on the process - they’re everywhere!

It was through that experience that I became connected with the New Hampshire Rebellion. NH Rebellion seemed like an amazing place to see the grassroots side of things come to life. I wanted to see how events are planned, how volunteers are energized, and how movements are built. I wanted to walk the walk for 20 miles on July 4th, and do something active in support of the movement. The research side of things is amazing, but that is not how revolution and change in this country occurs. It occurs from everyday people standing up against a system that no longer represents them.

I also wanted the opportunity to see candidates up close and speak directly to them. Growing up in neighboring Vermont, in the small ski town of Stowe, I never had the opportunity to see candidates up close. I was always so jealous that New Hampshire had that privilege! And as a political nerd, I knew that that would be something that I would really enjoy.

So far that has been my favorite part of the experience. My handshakes with Martin O’Malley and Marco Rubio, my intense eye contact with Jeb Bush and Bernie Sanders, and my fist bump with Lindsey Graham have been incredibly memorable. I loved hearing Lindsey Graham’s southern drawl tell me to “keep up the good work,” and seeing Martin O’Malley’s hand tremble from nerves as he took a sip from a plastic cup. Those are the experiences that you can never get in a classroom, or even working in Washington D.C. New Hampshire is so incredibly unique in that way, and I am so happy that I’m able to spend the incredibly rainy summer here at NH Rebellion.