Over the course of the summer, we've had the privilege of working with a team of six smart, dedicated, talented young people through our Democracy Fellowship program, in partnership with the Foundation for Civic Leadership and Democracy Matters.  You may have seen them at walks, fairs, or other events, but here's your chance to get to know them! Here's our resident jokester, James: 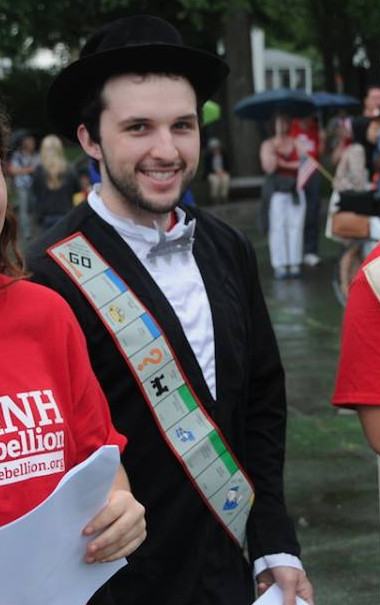 My name is James and I am working with the NH Rebellion as one of the summer fellows, which is a fancy way of saying “intern.”  I am about to be a senior at Dartmouth College where I study government and economics. I still cannot decide if I want to be a corrupt politician or if I want to do the corrupting so I’m keeping my options open by studying both fields.

Like most here at the Rebellion, I was drawn in by the pay. It’s almost too much money to stamp. Due to my large paycheck, I’m learning firsthand about the corrupting influence of money. Just by paying me a stipend, NH Rebellion has been able to make me do whatever they say. I labored through 40 hour weeks. I embarrassed myself by dressing up as the Monopoly man and ruined our 4th of July skit. I even attended a Donald Trump house party. Money can make a man do crazy things. I can see why this is an issue with our government.

The best thing about working in New Hampshire with the Rebellion has been meeting all the candidates. New Hampshire has been trusted with the unique responsibility of choosing our next President. I intend to take this opportunity to meet as many of the candidates as I can so I can make the most informed decision. Thus far, I’ve seen Jeb! Bush, John Kasich, Marco Rubio, Carly Fiorina, Donald Trump, Rick Santorum, and Hillary Clinton. But it isn’t all fun and games - meeting the candidates is an important part of my job. We have all been tasked with asking the candidates which specific reforms they will advance to end the corrupting influence of money in politics. It’s going to be hard for me to pick between these candidates because they've all done a great job of dodging this question. The candidates are starting to refine their positions though, so I'm seeing real progress and looking forward to choosing the lesser of 20 evils to receive my vote in the upcoming primary.