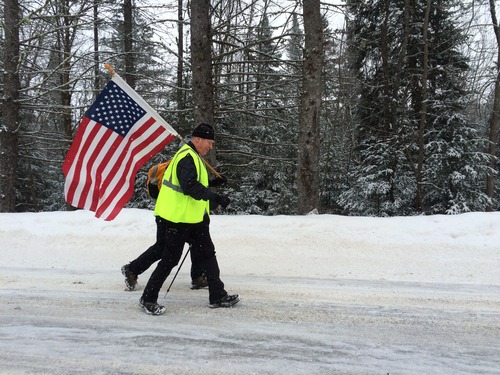 Fiercely cold, brilliantly sunny day three. Fifteen miles to the base of the White Mountains, 10 miles of which we climb on day four.

Pictured above is Dick Cates. Cates is my cousin. His uncle was one of the most important figures in my life (I write about him in my book, Code (PDF). My cousin ran for representative this last cycle in Wisconsin. He entered the race the leader (a 20 year member of the school board, and local farmer, well liked); raised and spent about $100k over 13 months. But he became the target of a SuperPAC that supports school vouchers. $300k later, Cates lost by 64 votes.

The striking part of the story was messaging. The SuperPAC didn’t attack Cates on school vouchers — or anything related to the substantive position they cared about. The attacks were just to kill.

Walking 30 miles across NH in January has converted him to the cause. Wisconsin has a new money in politics leader. 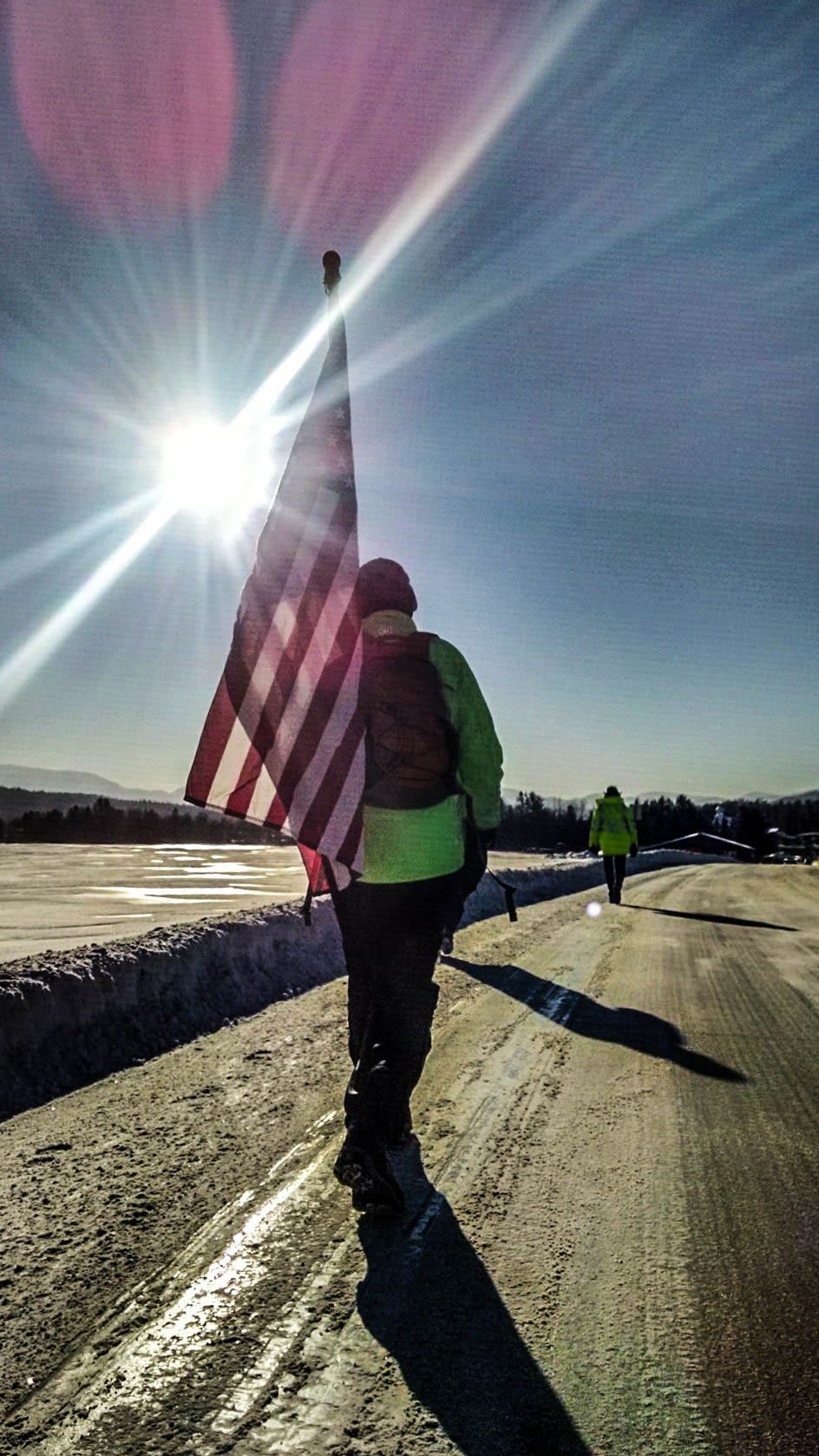 We've been getting some great imagery from the road, but this photo, from Gabriel Grant, one of the walkers, was just outstanding.

Gabriel was one of the walkers last year as well, and one of the brilliant minds who shows up at just about every Team Democracy Hackathon. He's also the guy carrying the phone that gives us the live-tracking data for the Dixville Notch route - so when you see that little blue dot moving - that's Gabe you're watching.

We've been getting some more press, including television coverage from Derry, NH-based WBIN's NH1 News, and from RT America.

We've also been getting some great comments in via our Cheer Us On page, and we want to share some of those with you now:

What you're doing is great and the EXACT prescription our country needs in order to become a functional democracy once again!

Beverly and I are in Thailand but support you 100%

Thanks for walking! I appreciate your effort and your message.

THANK YOU SO MUCH

Just wish I could be there.

Keep up the good work

I live in Oakland CA and appreciate you efforts so much. Many of us are with you on spirit!!

I send heart fueled love and deep appreciation for your dedication to democracy and human evolution.

Sandra W. ...see you in Concord.
Here's wishing all the walking rebels in New Hampshire
the best of luck in your endeavour!!!

I live in Germany, but wish I could jump on board with
you in NH (despite the cold!!)!!.

Hats off to you all! Respect!!

John
Winds of change in New Hampshire
I think you all are AMAZING defenders of democracy!  Thank you for sharing the updates (and beautiful photos) as your march continues.  I think that investing your time and energy, as well as braving the bitter NH cold, to bring attention to the importance of reform gives the media and politicians undeniable evidence that voters are passionate about this issue and willing to make sacrifices to have their voices heard.  That sacrifice creates a spark of leverage against all of the insider influence, and is ultimately more powerful than any sum of money.
You all are role models for me and countless other citizens who often feel powerless over the DC insiders, my hope grows stronger every time I see an update!
With you in spirit, and hopefully in person next year,
Phil P.
HEROES!
You are not alone in the cold!  Even in Richmond VA there is ice all over the roads today.  I want you to know that there are many all over the country who are cheering you on.  The money problem in politics is at the root of many evils.  I am a ROOTSTRIKER  too.  Working for Healthcare for All.  Stay safe on the road.
Susan M.
Do you like this post?
Tweet