We wanted to let our supporters in the Seattle area know that Lawrence Lessig will be speaking in Seattle on Thursday, June 4th, at the Town Hall Seattle venue, alongside bestselling author Marianne Williamson.

If you can make it, you’ll be able to hear directly from both Lessig and Williamson at the event and afterwards at an informal reception.

Tickets are $15 for the movie and reception, and every dollar of those funds will be used to support the work of the New Hampshire Rebellion to reduce the corrupting influence of money in American politics. Tickets can be purchased at the door for $20. Please note, this event is expected to sell out so please be sure to purchase a ticket online in order to secure a seat.

Here is a direct link to the event on the Town Hall Seattle venue site, and here is the Facebook event.

This event will also feature the Seattle premiere of "Killswitch: The Battle to Control the Internet" which covers some of the current work of the New Hampshire Rebellion. 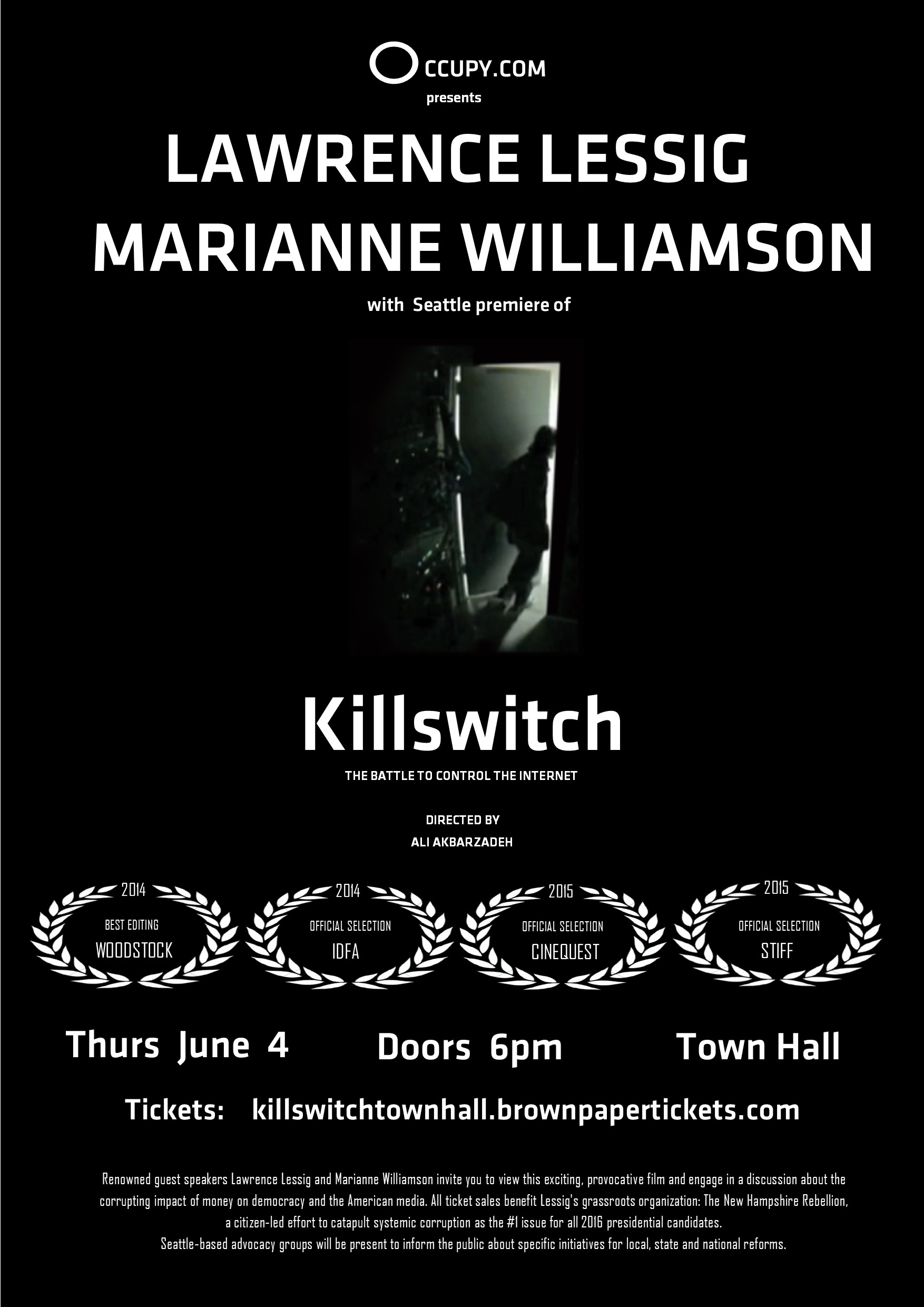 Last Saturday was Patriots’ Day, and the NH Rebellion celebrated in style - by walking the talk for democracy and asking the question at the biggest gathering of 2016 candidates yet.  Nearly 100 people participated along the 15-mile route, and between the historical reenactments and the hamburgers, a good time was had by all.

A spirited group of walkers started the morning in Lowell, Massachussetts at the Pawtucket Congregational Church.  Paul Revere, played by our own Ellen Read, led them north from under the church’s ringing Revere bell.  We were all grateful for the hospitality of the Pawtucket congregation and their Reverend, Ruth Richards.

The walkers enjoyed sunny skies on their way to Nashua City Hall, where they were overjoyed by the crowd awaiting them.  At first, King George III tried to steal the microphone and praise how thoroughly the American campaign finance system concentrates political power in the the hands of an oligarchic elite, but he was soon put in his place when Paul Revere came riding into the square to raise the cry "The fat-cats are coming!" and call on the assembled patriots to put an end to systemic corruption once and for all in 2016. Paul Revere was followed by 15 year-old walker Ella McGrail, whose stirring adaptation of Henry Longfellow’s poem inspired the assembled crowd to continue Revere's patriotic cause in our time.  Jeff Clements, co-founder of Free Speech for People, also spoke about the growing national movement to stop the corrupting influence of money in politics after Citizens United.

When the group departed for the Crowne Plaza hotel, the walkers stretched for several blocks.  Some carried signs, others carried flags. Many wore patriotic Paul Revere hats, and all lent their voices as we approached the presidential summit.  Intrigued by the commotion, much of the local and national media attending the summit came out to hear us, and Paul Revere was able to deliver our anti-corruption message to a broad audience.

After all that hard work, the walkers deserved a celebration, and they had one just across the street from the presidential summit.  We grilled burgers and hotdogs, enjoyed Ben & Jerry’s, and marvelled at the Stamp Stampede’s Amend-o-Matic Stanpmobile before packing up the flags and calling it a day.  A huge thank you to all of the walkers and drivers who made this latest march for democracy a success!  Check out pictures, video, and media coverage.

Get ready to march again on Memorial Day Weekend, July 4th, and beyond (details coming soon)!

One if by land and two if by sea,
And the die had been cast by the lamplight’s decree,
From the eye of the night in a cold belfry perch,
America burned from the peak of the church.

We were a line in an empire’s plan,
A pawn in the palm of Great Britain’s hand,
Yet in the most wretched and ragged of states,
We dealt England a blow and conquered our fates.

We were not impoverished, not wanting for bread,
Yet we would not settle to be sheltered and fed,
We demanded our freedom, where our spirit derives,
A dream for which thousands would lay down their lives.

And we’ve lived with that pride near three centuries in,
We showed to the world that the people could win,
We have fought to preserve through fire and brawl,
Liberty, freedom, and justice for all.

Yet here once again we have come under siege,
Though the enemy now does not lie overseas,
It is growing within us, a monster we’ve bred,
By greed and by excess it’s nurtured and fed.

The voice of the people and the power it’s owed,
Is being dismantled, dishonored, and sold,
And America’s choices, the people’s to make,
Now so grossly distorted for the wealthiest’s sake.

We look to our leaders in both of the wings,
And see nothing but puppets on the plutocrat’s strings,
The papers are lost, now made deaf to the truth,
And the high court’s decision has swept up the proof.

Bastardized now is the source of our pride,
The country split between two bitter sides,
It seems that to fight would be fruitless and yet,
The dream of this nation we must not forget.

Our most precious doctrine above any other,
Is that not one life is worth more than another,
Prestige and position don’t make one more whole,
And no wealth of no size can outweigh any soul.

They can muffle our cries but they are there still,
They can weaken our rights but they can’t touch our will,
No matter the odds, the length, or the strain,
We have conquered injustice and we’ll do it again.

We thank the brave others who fought to the last,
And remember the message that rings from the past,
The reason for fighting is stronger than fear,
For posterity’s sake and for those we hold dear.

This precious idea’s a perennial seed,
It’s only a matter of when it succeeds,
Under any condition it’s able to cope,
And the only defeat is giving up hope.

Liberty’s essence is our right to choose,
I pray we’ll not wait till we’ve nothing to lose,
For the sake of the future and the name of what’s been,
Nation, I ask you, to ride once again.

NH Rebellion will be in Nashua April 18, but not allowed at the FITN Republican Leadership Summit

NHRebellion registered as a sponsor of the Republican Party’s First-in-the-Nation [FITN] Leadership Summit. We were disappointed to learn on Tuesday that the New Hampshire Republican Party decided to cancel our sponsorship.

Since it appears too late to urge the NHGOP to reconsider their decision, we will be relying on our conservative supporters and New Hampshire media attending the event to respectfully ask all candidates this one question: “What specific reforms will you advance to end the corrupting influence of money in politics?” and to share with us video or audio recordings of their responses so that what they say becomes a matter of public record.

President Obama, speaking at the City Club of Cleveland Wednesday, was asked what he thought he could do about the issue of money in politics. And his answer - for the short term, at least - is to suggest that America make voting mandatory, as they do in Australia.

Whatever advantages to mandatory voting, it wouldn't do anything to stop the flow of money in politics. Indeed, it may worsen the problem, as the most apathetic towards voting would be most likely to be affected by the expensive advertising campaigns that require politicians to sell out to the highest bidder.

Ours is no ordinary drama.

Act 1 [complete]: Walk 12,081 miles through the New Hampshire snow to show the nation that We the People are fed up with big money corrupting our politics, and we won’t stand by. Thanks to your incredible sacrifice, our January walk was the biggest and boldest demonstration of citizen support for reform in memory, giving hope to many and winning headlines around the nation. Check out this CNN story and read our Report to the Movement to see how far we’ve come.

Act 2 [underway]: Ask the Question of every presidential candidate until they commit to real reform of money in politics. Sign our petition today demanding the candidates answer our Question, What specific reforms will you advance to end the corrupting influence of money in politics? While you're there, join a local team to question the candidates directly when they visit NH and other primary states – and be sure to request a free bumper sticker!

Happy Presidents Day. On this day, our message to the next President – fix the root problem first. 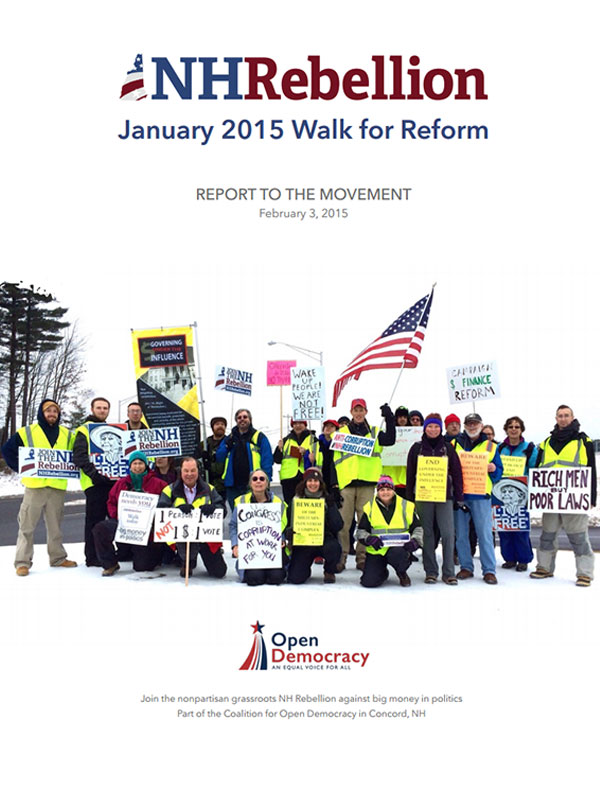