After a remarkable We the People Convention, Primary Day finally arrived in New Hampshire – and what a day for reform!

When we launched the NH Rebellion two years ago, we began Walking the Talk and Asking the Question across New Hampshire with one single aim: to make big money corruption the defining issue of the 2016 presidential primary.

Today, we met our goal – thanks to We the People. 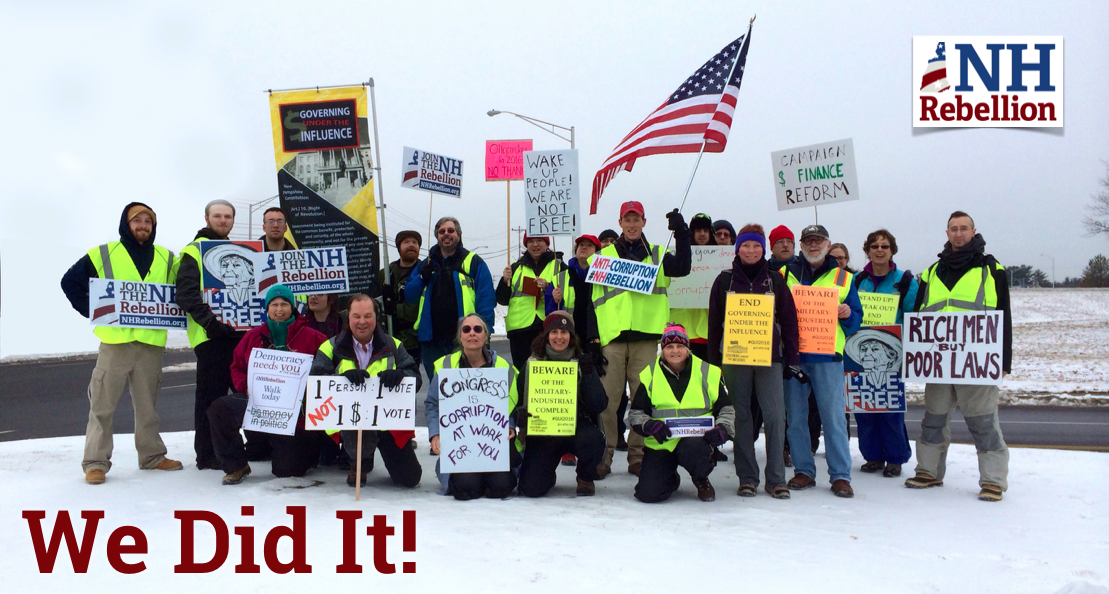 For the first time ever, the top candidates in NH claimed that campaign reform was their top priority, in response to voter demand.

On the Democratic side, Sen. Bernie Sanders' landslide 60-38% victory over Sec. Hillary Clinton was linked to Sanders' consistent condemnation of a "corrupt campaign finance system" and his calls for reform in every speech. Declaring victory in Concord tonight, Sanders said, "We served notice to the political and economic establishment…that the American people will not continue to accept a corrupt campaign finance system that is undermining American democracy."

Even so, Clinton sought to challenge Sanders' widely-accepted claim to the reformer mantle with help of a comprehensive reform agenda of her own. In her concession speech tonight, she maintained that "no one is more aggressively committed to campaign finance reform than me" and assured her supporters that "Senator Sanders and I both want to get secret, unaccountable money out of politics and [overturn]Citizens United."

Multiple candidates competing to out-reform each other is just fine with us!

On the Republican side, Donald Trump scored a decisive victory in the NH Primary under the banner "can't be bought." According to Trump's own estimation tonight, "one of the things that really caught on, it's very important, [is] self-funding my campaign" – a sharp contrast with the millions in "special interest [and] lobbyist" money being raised by his opponents. "We were not going to let it happen," he said. "We have to do something about it." Although Trump has yet to release policy specifics on this or other issues, he has consistently called for full transparency, banning Super PACs, closing the revolving door, and even expressed support for small donor citizen-funded elections in response to our demands.

Trump's runner up, John Kasich, also decried the millions in negative advertising as the "old politics" that must end, in a moving speech tonight. Under a flurry of questioning from NH Rebels around the state, Kasich has also said he would support full transparency and nonpartisan redistricting reform, and is open to banning Super PACs and passing citizen-funded elections, as recommended by the late Republican senator Warren Rudman. Not far behind him, Jeb Bush just yesterday joined former candidates Lindsay Graham and Jim Gilmore in supporting a constitutional amendment to overturn Citizens United – no small feat for a Republican in today's climate.

Our work as a reform movement is far from complete. As the primaries move from New Hampshire to other states, we will continue working with partners around the country to inject our issue into the national debate, we we'll ensure it also gets addressed by state candidates in 2016.

Next up: Democracy Spring!

But tonight, we pause to celebrate how far we've come together. Together, we will #FightBigMoney – and win!

Thank you,
The NH Rebellion Team