Six year ago, the Supreme Court ruled that money is equivalent to speech in a Death Star of a decision known as CITIZENS UNITED. On January 21st, 2016, the anniversary of the ruling, the US REBEL ALLIANCE and the NEW HAMPSHIRE REBELLION are teaming up to DESTROY THE DEATH STAR of Citizens United.

Join us for a FREE SCREENING of STAR WARS: THE FORCE AWAKENS, with an awesome pre-show performance featuring super SPECIAL GUESTS. Help us defeat the EMPIRE of BIG MONEY by lending your presence and your voice to the effort!

All you need to do is SIGN UP & SHOW UP. The movie is absolutely free, and a full menu of food and drink is available for purchase from Chunky’s.

Space is limited, and seating will be first come, first served, so please arrive early. 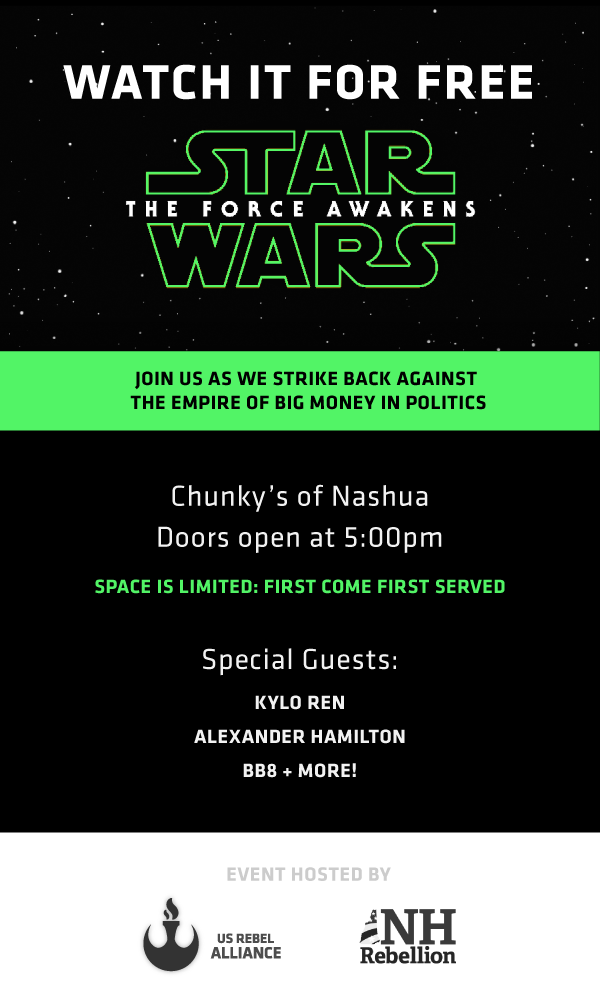 Admiral Ackbar says: “It’s NOT a trap!”
We’ll see you at the show, and may the Force be with US!

WHAT:
Free screening of STAR WARS: The Force Awakens and Awesome Pre-Show

WHY:
Support the US Rebel Alliance & New Hampshire Rebellion in their mission to DESTROY THE DEATH STAR of Citizens United.